Welcome to Verano Cubano! This gallery presents photos from my visit to Cuba during the summer of 2013, when I spent about five weeks in Havana and nearby towns. The majority of these photos were displayed during two shows in 2014 at Caffé Lucé, a cafe and coffee house with two locations in Tucson, Arizona. Please click on the the photo thumbnails in order to see full-screen images. 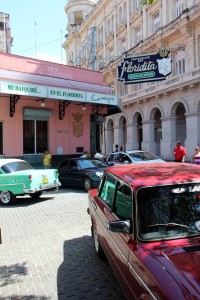 One of the fanciest (and most expensive!) places to get a drink in Havana, this restaurant is known as “the cradle of the daiquiri.” Ernest Hemingway is said to have helped make up the recipe for the tasty drink and a bronze statue of him sits at the bar inside. 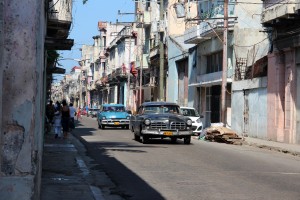 Many of downtown Havana’s main streets are manicured and carefully restored. This is a view into daily life in Havana, away from the tourist areas. 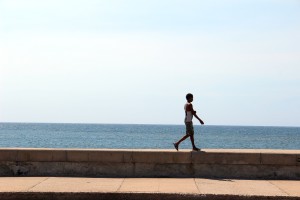 During the day, the Malecón is a place where people hang out, cooling off with the sea breezes blowing in from the Bay of Havana. At night, the Malecón is full of spontaneous music and romantic couples. 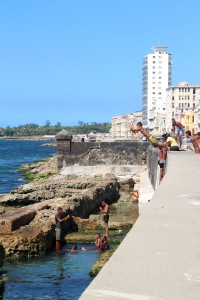 Young kids and teenagers swim along the Malecón. Jumping into the pools created by the old docks looks like fun for the adventure-loving. 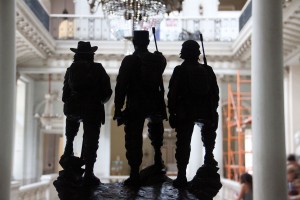 A statue of Ernesto “Che” Guevara, Camilo Cienfuegos and Fidel Castro overlooks the main staircase at the Museo de la Revolución in Havana. This museum, telling the story of Cuba’s history, is located in what was once Dictator Fulgencio Batista’s residence. 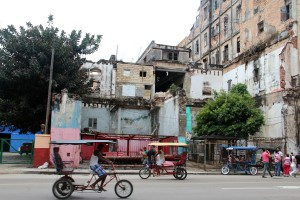 Near the entrance of Havana’s Chinatown, bicitaxi drivers race around the streets. 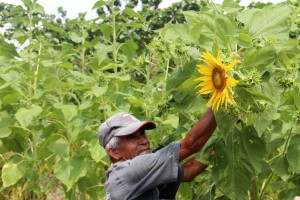 Like many Cubans, Salvatore and his family keep a personal garden near their home. He sells sunflowers for both decorative use and santería ceremonies.

Trinidad’s colorful buildings and uneven streets feel like a different world from the busy streets of Havana.

A street view in Trinidad, a small colonial-era town on the southern coast of Cuba. Although there is a strong tourist industry, the town’s atmosphere is relaxed and comfortable.

A fisherman near the Bay of Cienfuegos prepares his catch for a Father’s Day fiesta later that evening. Throughout Cuba, Father’s Day is a major holiday celebrated by families and communities coming together.

This city, founded in 1514, is on the southern coast of Cuba. The colonial-era cobblestone streets and beautiful pastel-colored buildings were declared a UNESCO World Heritage Site in 1988.

Ferrys, like this one, travel frequently from Cienfuegos to the Castillo de Jagua. The Castillo was built in the 18th century to protect the bay from Jamaican pirates.

Situated at the mouth of the Bay of Cienfuegos, the Castillo del Jagua (Jaguar Fortress) was originally built by the Spanish in the late 1700s to protect the area from pirate attacks. Today, the fortress is an important historical site under restoration.

In Cienfuegos, even natural colors seem enhanced under the warm Caribbean sun.

In the United States, these would probably be called “classic” cars…in Havana, they’re taxis! Painted a variety of colors and carefully maintained, Havana’s taxis present both reminders of the difficulties caused by the trade embargo, which prevents many new imports, and a beautifully colorful demonstration of Cuban inventiveness.